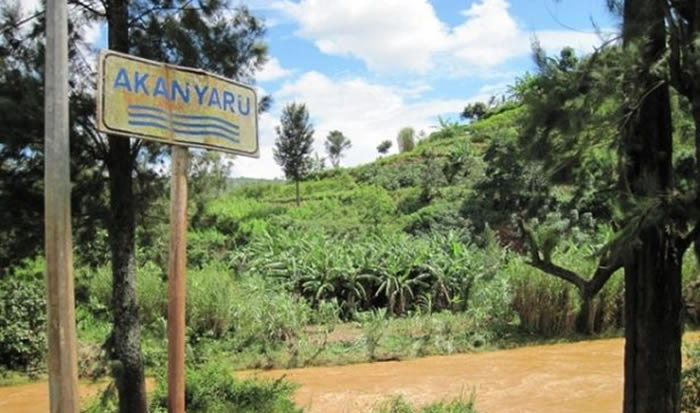 Akanyaru River is one of the rare but unexplored rivers within Rwanda and can be visited by tourists looking to explore wetland and aquatic bird species. This River is the main header of River Nyabarongo and springs up in the western highlands of Rwanda and Burundi before flowing east and northwards along the border of these two countries before finally meeting River Nyabarongo within Bugesera District of Rwanda.

The lower banks of River Akanyaru are made up of significant but unprotected wetlands that are unfortunately under threats resulting from human activity. Much as it’s the main head water of Nyabarongo River, its main tributary/source is Mugere River that rises at an altitude of  2450 meters (8040 feet) above sea level while other sources rise about 2300 meters (7500 feet) above sea level in the southern side of the country. Most of the valleys of the higher headwaters are blocked by papyrus that also comprises of seasonal swamp forests. The river basin with the catchment area extends for about 2650 square kilometers (1020 square miles/265,000 hectares). Generally, the upstream area of this River receives an average annual rainfall of 1200 millimeters while the wetlands experience an average rainfall of 800 millimeters. There are two seasons-rainy season from mid-September to mid-December and March to May as well as the dry season from June to September.

The lower course of Akanyaru River is comprised of a belt of permanent wetlands extending for approximately 7 kilometers wide and reaches the Nyabarongo River. For the 80 kilometers stretch, the River drops from an altitude of 1465 meters (4806 feet) to 1400 meters (4600 feet) with the swamp being fed  by Cyohoha south and Cyohoha North

Flora and Fauna within the Akanyaru River and wetlands

The channels are dominated by Pistia stratiotes (locally referred as water cabbage), Oryza barthii and Leersia hexandra but when you move closer to the banks of the river, you will find papyrus, Cladium jamaicense, Miscanthidium violaceum and Typha australis among others.  The Akanyaru wetlands are one of the most wonderful birding spots in Rwanda with several species found within the wetlands. So far, there are over 54 bird species in the swamps and they include the near-threatened Papyrus gonolek, the migrant Malagasy pond herons, Pallid harriers, the Papyrus yellow warblers, Great snipe, lesser kestrel and many others. There are also 11 species of the Lake Victoria Basin Biome as well as three of the Afro-tropical highland species in the area. Besides these wetlands, other remarkable birding places in Rwanda include Nyungwe Forest, Akagera and Volcanoes National Parks as well as Kigali City, Nyiragongo swamps and the Albertine Eco-region. When you visit this River and swamp, you will encounter the sitatunga, the exceptional swamp-dwelling antelope species.

However because the Akanyaru wetlands are not protected, the locals use the area for agricultural purposes especially in the dry season where the vegetation is cut and burnt to create more fertile land for farming. Usually, crops such as sugarcane, sweet potatoes, rive and maize are grown in the area but on top of that, the communities take part in fishing within the Rivers and surrounding Swamps. Worse still, brick laying is practiced by the local people in the area where Akanyaru joins the Nyabarongo River hence destroying the habitats of animals and birds that call the wetlands home.