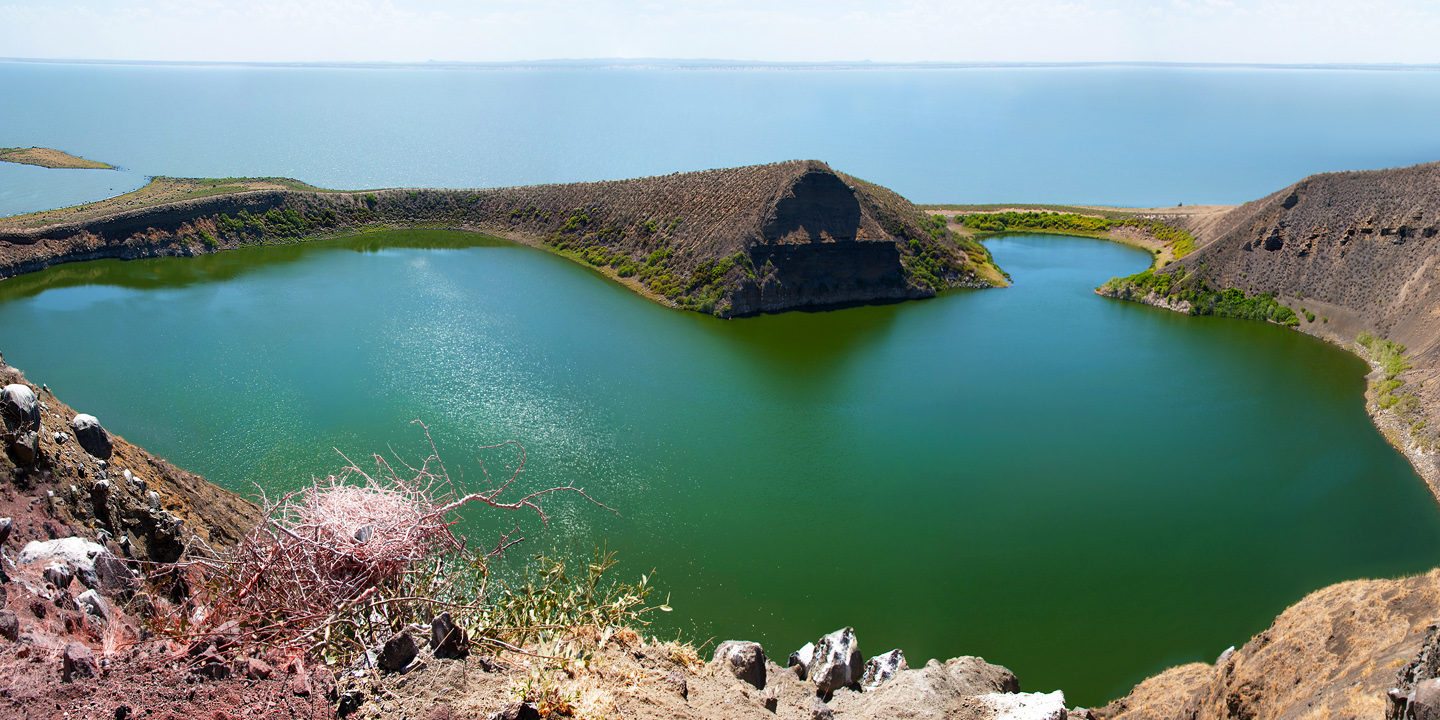 Central Island National Park is located in the heart of Lake Turkana the most famous and the largest permanent desert Lake in the world. It offers refuge to three (3) most powerful volcanoes and three (3) Crater Lakes most of which are worth exploring while on safari in Kenya. Not only is this spectacular protected area known as the crocodile island but also an island full of hippos. It is strategically situated within Lake Turkana an area that features most of the flamingos and also acts as an incredible breeding ground for most of the tilapia, crocodiles and aquatic birds. Lake Turkana features about three magnificent conservation areas; the Central Island National Park, Southern Island National Park and Sibiloi National Park and the most of which provide refuge to archaeological and paleontological sites making Lake Turkana and its Islands a true paradise of fossils and other deposits.

If you are adventure seeker then consider Central Island National Park a must to include safari destination in your bucket list. The park refuges most of the stunning volcano cones that count 3 buzzing and fiery active volcanoes and smaller volcanic cones. Each of the volcanoes features a Crater Lake making this park one of the only areas where you can sight Lakes within a Lake. This magnificent protected area covers an area of 5 square kilometers making it one of the smallest national parks with intense biodiversity. Its diverse natural wonders rank it one of the most remarkable UNESCO World Heritage Sites that you shouldn’t miss to pay a visit while on safari in Kenya. Central Island National Park can be reached by road and by air.  Visitors can fly and land in the 2 (two) airstrips neighboring Lake Turkana and then connect to the island by boat.

For visitors who intend to pay a visit to this remarkable national park, you can pay a visit especially during the month of June and July as they are characterized by moderately cooler temperatures. And from December to March, temperatures are warmer and the area is completely dry. This also means that you will need to come along with enough drinking water and energy snack as well as sun screen, hat.

What to do on safari in Central Island National Park

If you are interested in birding experiences, then you have to consider Central Island National Park in your bucket list. With more than 350 avian species, this park is undeniably one of the birders paradises in Kenya. 84 of these bird species are largely aquatic and about 34 species of European migrants also exist within the park especially between March and May as they flock in the island for breeding.

Being a crocodile island, Central Island National Park is one of the most incredible protected areas that you should consider visiting to catch a glimpse at most of the crocodiles. This park offers refuge to the largest and the most accessible natural crocodile nursery in Africa. Amazingly, these pre historic reptiles have existed for centuries prior even the arrival of man and they have kept on thriving peacefully with nature for more than 30 million years. You will be amazed by their huge sizes, length however; travelers are always escorted by an armed guard while walking along the island. The breeding period for crocodiles in this park is between April and May. While walking along the island, you will have incredible moments especially when the baby crocodiles are squeaking. For birders, you can as well sight out most of the sacred ibis, Egyptian geese, little and great white egrets, goliath and grey herons, African skimmer. The alkaline Crater Lake that lies within Flamingo Crater lures countless lesser flamingos and not to forget black winged stilts, pelicans and spur wing plovers. Other species include swallow tailed kites and osprey.

Central Island National Park features Flamingo Crater that offers spectacular views of the surrounding areas and allows visitors to catch a glimpse of the most colored cliffs and opal colored water of the Alkaline Lake that also attracts most of the stunning pink flamingos and other birds of prey as well as variety of insects, butterflies and dragonflies, wild flowers.

For visitors who are interested in game viewing, the notable wildlife species for you to spot out include hippos, topis, crocodiles, Oryx’s giraffes, grant gazelles, grevis zebras, bats and others.

The park is also known for its amazing boat rides that start in either of the Lakes or from Kalokol gate and reward visitors with amazing views of most aquatic wildlife and water birds. For interested visitors, be aware that the Lake can at times be challenging to cruise through especially during the windy weather and the boat cruise lasts for about 1 to 2 hours but this depends on where you will set off from. You should therefore be healthy if you plan to sail on Central Island’s Lake.

Other activities for you to engage in at this park include nature guided walks, fishing, camping safaris and many more.

Central Island National Park doesn’t have accommodation within the park however, it has some camp sites and a few accommodation facilities on land and Eliye Springs Resort is one of the most accessible places for visitors stay over.

In conclusion, if you are planning a trip to Kenya, this should be a must to visit national park and you will certainly be amazed by incredible experiences of lifetime.