For visitors with limited time and interested in visiting one of Kenya’s national parks count Nairobi National Park a must to include in your travel plan. This protected area isn’t only credited for its close proximity to the city center but also the only conservation area with diverse wildlife and birdlife in the world a reason it is best described as a capital of wildlife. Nairobi National Park is located about 7-10 kilometers drive making it the only most accessible safari destination in Kenya and for city dwellers on safari in East Africa and Africa at large, this is the perfect destination that you should consider for you to realize your long time dreams. This park is situated within River Embakasi and extends up to 117 square kilometers.

This protected area is famous for its unique faunal and floral species that depict the true Kenyan landscapes; vast grass plains which come with scattered acacia bush. On the western side, Nairobi National Park consists of mainly the dry forest and a permanent River with a riverine forest and not to forget its rugged valleys and gorges. There are also man made dams that have been established mainly to provide more habitats to most of the park’s bird species and many other water species. Interestingly, most of the herbivores flock into these dams for water during the dry season. On the southern part, there is Athi Kapiti plains and Kitengela migrant and dispersal site and they are credited for their herbivores dispersal. There are several hyraxes thriving on the rocks on the road side and while you are on your safari, you will catch a glimpse at klipspringer or mountain reedbucks which still remain unexploited. 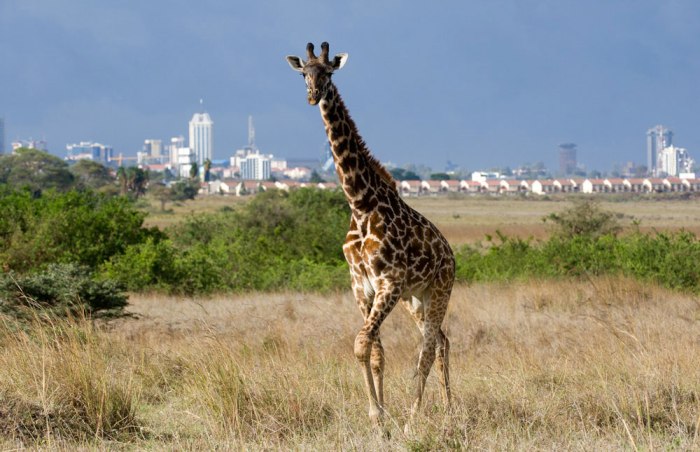 Nairobi National Park was established in 1946 making it one of the oldest of all the protected areas in Kenya. The park is best known for its four of the big five game in Africa most of which include the rhinos-the black rhinos that rank the park the most famous and significant rhino sanctuary in Africa with over 50 individuals that thrive within it ever since they were re-introduced to this protected area. There are also lions, leopards and buffaloes for you to catch a glimpse at while on wildlife safaris in Kenya. Nairobi National Park is also famous for most of its ostriches and wildebeest migrants which flock into this destination during summer time. The annual wildebeest and zebra migration occurs from July to October where over 1.5 million wildlife species can be sighted flocking looking for water and pasture.

This makes July and August the perfect time for visitors to make their dreams come true with these remarkable species. Other wildlife species that you shouldn’t miss to spot out in this remarkable conservation area include the Maasai giraffes, hyenas, elands, zebras, coke’s hartebeest, grant’s and Thompson’s gazelles, warthogs, cheetah, jackal civet, genet,  impala,  and not to forget hippos and crocodiles which thrive within Embakasi River. With this diversity, Nairobi National Park is exceptionally one of the best safari destinations that you should consider visiting for incredible game drives. Wildlife spotting in this protected area is conducted both in the morning and afternoon when most of the wildlife can be active offering visitors the most spectacular views while in their luxurious safari land cruiser.

About 450 bird species are found in Nairobi National Park making it one of the important bird areas in Kenya. The northern migrants flock into the park from March to April. For very keen visitors, you will catch glimpse at the crowned eagle, flightless ostrich, red collared widowbird, Kori buzzard, Walberg’s honey birds, helmeted guinea and many others. There are also walking trails at hippo pools, ivory burning site monument, Nairobi safari walk and the orphanage, 5 picnic sites and many more. The park also attracts visitors for turtle and tortoise viewing as well as bush dinners, weddings and film production. For bird watchers, you will need to come along with enough drinking water, binoculars, guidebook, camera, sunscreen, sunglasses and picnic items.

When to visit Nairobi National Park

Nairobi National Park lies between altitude 1500 meters and 1700 meters and experiences its peak season around July to March and this is the period when the park experiences its dry season. The wet season occurs from late March to June and navigating through the park tends to be challenging. A short wet season is also experienced from October to December. For the most excellent wildlife species, you can pay a visit to the park early or late in the day.

Getting to Nairobi National Park

Nairobi National Park is reachable on tarmac road about 7 to 10 kilometers off Nairobi capital city and you can use private or public means of transportation. There are 6 major gates that offer access to the park and they include the east gate, Maasai, Mbagathi, Banda, Cheetah and Langata gate. The other alternative is by air and tourists can fly and land into Kenyatta International Airport and Wilson Airports. The park entry fees include KES.150 for East African citizens, 300 for East African residents and non residents $20 and these apply for adults. For children or students-East African citizens pay KES 50, East African residents pay KES 150 and $10 for non residents. Interested visitors are also required to come along with safari cards, for citizen-you will need a valid passport or national ID and resident-valid passport and re-entry pass.

Where to stay in Nairobi National Park

In conclusion, Nairobi National Park is one of the smallest national parks in Kenya and Africa at large. For city dwellers, consider this park a must to include in your bucket list and you will be amazed by spectacular views of its wildlife species.