Rwanda is a small land locked country located in East Africa, bordered by Uganda in the north, Tanzania in the East, Burudi in the South and DR Congo in the West. The country attracts many visitors including tourists, business travelers, Volunteers and researchers among others. A wide variety of Rwanda holidays offered by tour operators mainly cover gorilla tracking in Volcanoes National Park, making it the country’s number one attraction. The country is accessed through Kigali International Airport, located 15 minutes drive from Kigali city center. There are mainly 3 tribes namely; Tutsis, Hutus, and Twa.

Two tribes that made most of the Rwandan population are the Hutu and the Tutsi tribes. In 1978, a Hutu leader was elected, Juvenal Habyarimana, as president of Rwanda. After 12 years of peace, Habyarimana was assassinated while he was traveling on a plane. Although they haven’t found out who launched the surface-to-air missile, government forces suspect rebels from other minor tribes planned the assassination. About an hour after the president was killed, the Presidential Guard and government army started to kill Tutsi and Hutu people from nearby villages and communities. 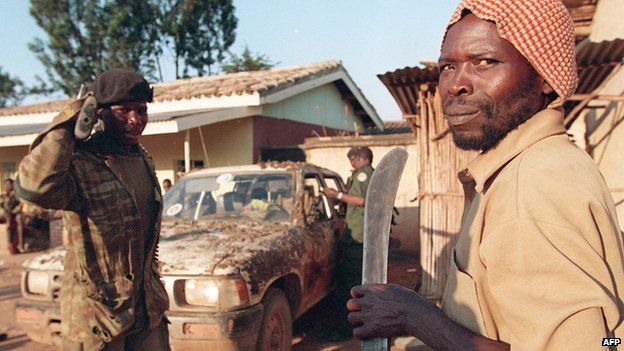 This campaign of government forces that started to kill Rwandan people was the spark of the genocide.
The 1994 war in Rwanda between the Hutu and the Tutsi, came up with a number of effects (positive and negative) – there was mass blood shade where hundred and thousands of people lost there lives. As the war started, the number of dead went on increasing day by day and at the end of the war the UN estimate the number killed as 800,000.

After the war, the dead bodies were seen laid on the ground – rotting and bad smelling was the order of the day in Rwanda.

There was loss of properties like houses, animals, birds, crops among others. Gardens were destroyed, houses were burnt, animals and birds were killed.

There was cropping up of Massacre museums like Gisozi, Murambi, Nyamata, Bisesero among others. Today the museum sites have promoted Rwanda’s tourism sector – after Gorilla trekking, chimpanzee tracking or another activity, tourists find it hard to leave Rwanda minus visiting any Genocide site.

There was rising number of war prisoners. The Hutu and Ttusi who attempted to create a strong residence and plots in the course of the war were imprisoned.

New faces of leaders were seen. The current president of Rwanda, Paul Kagame took the office in 2000 when his predecessor, Pasteur Bizimungu, resigned came to an end. Paul Kagame previously commanded the rebel force that ended the 1994 Rwandan Genocide.