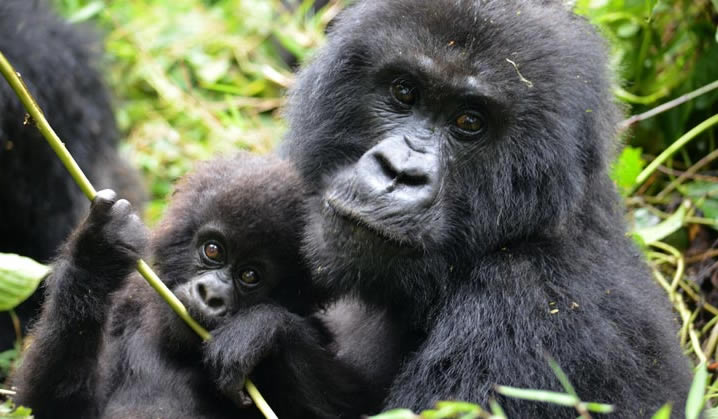 Rwanda has increased the price of gorilla permits from $750 to $1,500 for all tourists including the local tourists.

The statement made by the Rwanda Development Board (RDB) early this week will clearly affect the number of people going for gorilla trekking, which will then presents Uganda with a chance to take advantage of Rwanda’s market.

A Uganda gorilla permit costs $600 which is far cheaper than the $1,500 that Rwanda is going to be charging.

In any case, the increase, as indicated by Clare Akamanzi, the CEO of RDB, concentrates on the long term where “we need to ensure that the local people living near or around the national parks get a bigger share from tourism to help them economically and even fund development projects”.

This, she says, likewise tries to guarantee sustainability of conservation activities and also improving tourist experiences.

The debate
In any case, beyond the audit of the fees, is a civil argument that has been touched off in the region, particularly concentrating on whether Uganda ought to take the same way and review its charges upwards.

Amos Wekesa is one of the main partners in the tourism industry and he the chairperson of the Presidential Investors Round Table on Tourism Committee.

In this way, he talks from a vantage point and contends that Uganda needs to “put our home with the aim of taking advantage of the events [in Rwanda].”

His contention is supported by Richard Smith of Aardvark Safaris, who trusts that the new Rwanda gorilla permit prices are probably going to drive business to Uganda.

“In case Uganda also increases the fee for gorilla permits there will be a general drop demand and trekkers may be force to opt for other tourism activity,” he says.

Miles Barber a tour agent based in Landon thinks assessed rates are very high and will affect the number of tourists visiting Rwanda.

“There are a lot of choices for tourists around the world,” Barber, who works for a London based tour company – Theobald Barbour, says, including the increase on gorilla permit fees may have a negative effect.

This, according to Geofrey Baluku, a tourism consultant, presents Uganda as an opportunity to conduct an in-depth analysis in order to have an informed action plan.

In any case, he wonder “why always Uganda have to wait for Rwanda to act,” inferring that Rwanda may be more smarter in light of the fact that they have their sight set on the longer term and additionally providing visitors with better tour packages.

As indicated by Rwanda Development Board (RDB), an average of 80 gorilla permits is issued to visitors consistently.

“In Uganda where a gorilla trekking permit is at $600 it takes one more than $550 to go to Bwindi Forest in Kisoro,” Baluku says, highlighting that the distance from the airport to Rwanda’s gorilla park in Volcanoes National Park is shorter compared to the distance between Entebbe International Airport and Bwindi Impenetrabel Forest in Kisoro in the south western part of Uganda.

Despite the fact that Uganda has been offering gorilla permits at $600, sales still favour Rwanda, which effective this week will increment from $750 up to $1,500.

Additionally, not at all like Uganda, Rwanda has an airline (Rwandair) that connects to different destinations, for example, UK, Japan, Chain and others countries.

“To expand this, their transport to the Volcanoes National Park is cheaper because its just only 2 hours drive from Kigali International Airport and accommodation is relative cheap also that is the advantage Rwanda has over Uganda,” Baluku contends.

Be that as it may, as indicated by Andrew Sseguya, the Uganda Wildlife Authority (UWA) boss, Uganda remains an amazing travel destination since gorillas can be tracked in two national parks – Mgahinga Gorilla Part and Bwindi Impenetrable National Park- unlike in Rwanda which just has Volcanoes National Park.

This along these lines presents travel agents in Uganda with tough questions that must be answered to put the nation in a vantage point where it can utilize its advantages effectively.

“In case we organize well, as indicated by Baluku, we might be able to outmaneuver Rwanda,” notwithstanding, he says, Uganda must not overlook that Rwanda may try to build up itself in the long term as a main tour destination instead of being an addition on Kenya and Tanzania.

“We should utilize our gorilla permit as a store by offering promotions as we use on the present events,” he says, including that “In the event that we have 10,000 gorilla permits every year, we can select to utilize 1,000 as a lure for promotions and different motivating forces.”

Visitors booking in various national parks for longer periods, he advises, should likewise be considered for automatic qualification of specific benefits, for example, gorilla permits, which can be provided food for under various promotions.

The absence of good marketing strategies and public relations, as indicated by Wekesa, disfavors Uganda and it is the ideal opportunity for Uganda to esteem the power of advertising in the event that it is to have leverage over different nations in the region.