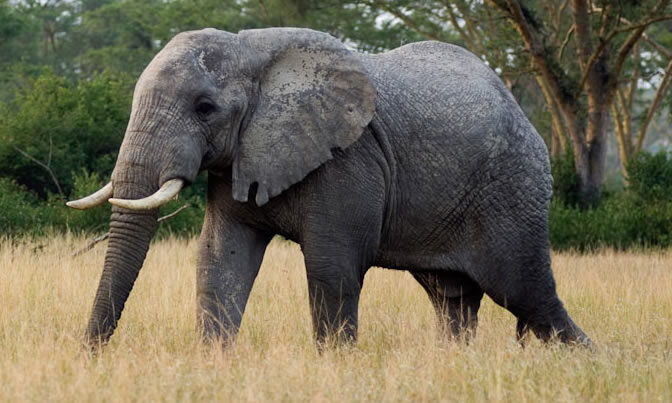 UGANDA – An elephant believed to be 34 years old died at the Mweya Peninsula of Queen Elizabeth National Park in the western Uganda on Monday in what is dreaded to be as an aftereffect of electric shock.

According to the Public Relations Manager of Uganda Wildlife Authority (UWA) Jossy Muhangi, the incident was brought on by a transformer.

Muhangi said that the elephant was found dead on Monday morning lying close to a transformer with cables attached to a nearby electric pole.

The wire mesh fence encompassing the transformer same meters from the tourist information center, had been freshly crushed most likely by the elephant as it was trying to force his way through the enclosure.

Thusly, Uganda Wildlife Authority (UWA) management called Umeme staff to the ground who temporarily switched off the power to allow the recuperation of tusks from the remains and for veterinary specialists to carryout a postmortem.

This is the third case of reported lethal electric shock cases in less than four years taking after two different cases involving elephants in Katunguru and Fig Tree regions of Rubirizi region.

Muhangi likewise said that Umeme’s arranged interventions to stop a repeat of such cases and the postmortem results will be shared in due course.

The population of elephants in Uganda has been increasing from 2,000 in 1986 to the current figure of 6000 elephants and has been due to the anti poaching activities conducted by Uganda government and the Uganda Wildlife Authority (UWA).

The population of elephants had declined due to the political wars and civil unrest of the 1970s and 1980s.