An overview of golden monkey species

Golden monkeys are one of Uganda’s 20 primate species. It is one of the eight subspecies of the blue monkey. Physically, golden monkey species have a gorgeous appearance compared to other monkey species. They have bright coloured fur with long golden hair mixed with orange. Female golden monkeys exhibit lighter colouration as well as grizzled brown patches.

The species have been classified as endangered with an overall estimate population between 2000 and 4000 individuals only found in the Virunga volcanic mountains. Socially, golden monkeys live in troops of about 30-100 individuals which are led by an Alpha male. The group size varies with elevation; with usually groups at higher elevations being smaller. The Alpha male is charged with the role of protecting and looking after the family while the females guard their territories.

Their diet is largely herbivorous where they feed on bamboo shoots, a variety of seasonal fruits, bamboo leaves, lichens, flowers, sprouts, leaves and small invertebrates. Feeding areas are often found in close proximity to their sleeping sites. The sleeping sites of golden monkeys are located at tops of bamboo plants. Unlike other primates, golden monkeys do not build new nests every day. In terms of habitat, golden monkeys live in bamboo forests and the vegetation below highland forests with sufficient fruits and bamboo.

They possess a life span of about 19 years and can weigh between 3-7 kg. Golden monkeys have a gestation period of 6 months after which a young one is born well-developed with all fur. They are seasonal breeders and females give birth every two years. The primary forms of communication used by golden monkeys are visual expressions and various vocalizations. 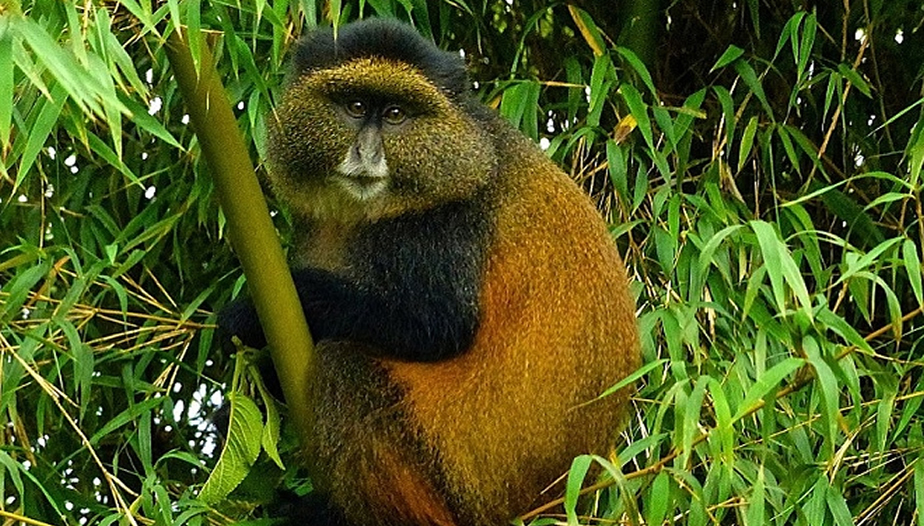 Uganda is a land adorned with plenty of wildlife species among which are the golden monkeys. Golden monkey trekking in Uganda is not so common an adventure. However, the few that engage in the activity affirm that it is an incredible way to view one of Uganda’s rare and beautiful monkey species.

Where is golden monkey trekking done in Uganda?

How is golden monkey trekking done in Uganda?

Golden monkey trekking starts at 7:30 am with a briefing at the park headquarters. After a briefing at 8:00 am, visitors take on the forest trails for an actual trek in search of the golden monkeys. Once the golden monkey is cited, visitors are allowed one hour adventure with the monkeys where they take photos and observe the monkeys jump from bamboo tree to another. After this lifetime encounter, visitors embark on the forest trails as they head for other activities at the park headquarters. 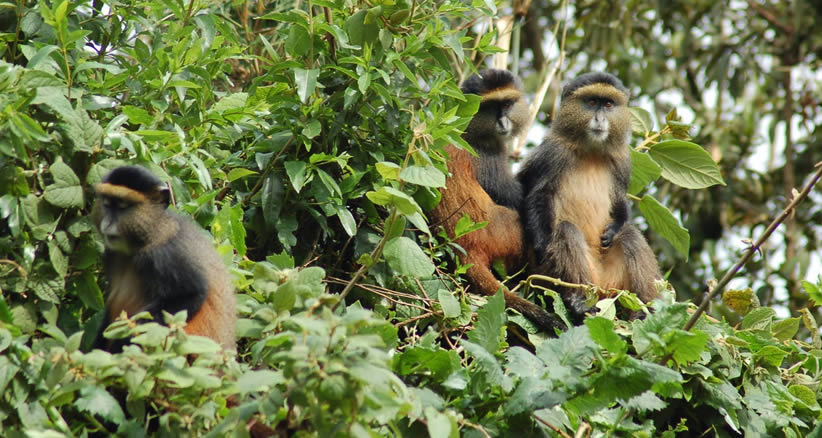 There is no minimum required age to trek golden monkeys in Uganda. However, children must be under the close watch by their parents to ensure they observe appropriate behaviour.

Is there any maximum number of people required to trek a golden monkey family?

There is no limitation to the number of people interested in trekking a given golden monkey family. A troop of golden monkeys can be trekked by as many people as present on a given trekking day in both Uganda and Rwanda.

There are several items that tourists need to have a memorable experience during golden monkey tracking. These include waterproof hiking boots, wear a long-sleeved shirt, long trousers, and carry a backpack for your lunch and documents, drinking water and snacks, carry a walking stick and an insect repellant.

Best Time to visit the golden monkeys in Uganda? 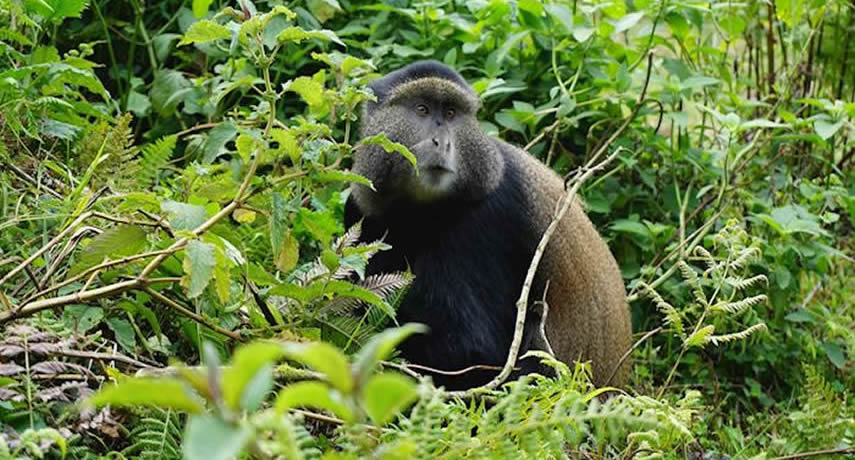 It is undeniably true that the best time to go on a Uganda safari is during the dry seasons. In Uganda, the best time to golden monkeys would be during the months of June to August and December to February. This is because during the fore mentioned months, the forest tracking trails are dry and less slippery. This makes hiking easy unlike during the rainy season. Alternatively, the favourable seasons to go golden monkey trekking for visitors travelling on a tight budget would be between March to April and October to November. These are considered as low season months because of the frequent rains experienced in the country. However, golden monkey trekking in Uganda can be done throughout the year whether one travels during a low season month or peak season.

Volcanoes national park is not only known for the adventurous gorilla safaris in Rwanda but also, it is the only destination where golden monkey trekking is done in Rwanda. The park has two habituated golden monkey troops with the larger troop in Sabyinyo volcano which consists of 80-100 members.

Minimum age required to visit the golden monkeys in Rwanda?

There is a number of equipment a visitor needs to carry to ensure one enjoys an exciting golden monkey trekking experience. These include; hiking boots, gloves, a pair of trousers, a long-sleeved shirt/blouse, and rain jacket, among others.

Visiting Rwanda for golden monkey trekking can be done all year round. However, the best time to travel is during the drier seasons between December to March and June to September. Visitors travelling on a budget may travel between the months March-May and July to September which are usually wet.

Why should you trek golden monkeys in Uganda and Rwanda?

Trekking golden monkeys is a lifetime adventure rewarding visitors with somewhat the best primate safari in Uganda and Rwanda. This is because while trekking golden monkeys, visitors get a chance to see other primates in the park such as monkeys, baboons and can even with luck come across mountain gorillas along the trekking trails. Thus, rewarding guests with a chance to view the unique primates found in Mgahinga gorilla national park and Volcanoes national park.

Although golden monkey trekking is overshadowed by the popular gorilla trekking in Rwanda and Uganda, it has remained one of the most exciting adventures that any traveller ought not to miss during their visit to the Virunga ranges and in most safaris to Uganda and Rwanda. It is because of this that travellers have often included the activity as a supplement to the gorilla trekking experience at either Mgahinga gorilla national park or Volcanoes national park.

Unlike other primates, golden monkeys are some of the least nervous monkeys a visitor can get so close to within a meter. They are great for photography and camera flashlight least affects them which is not the case with other primate adventures- gorilla and chimp treks. It is alleged that these primates even love a camera flashlight thus making a visit to these monkeys an incredible experience.